Above is the text of Ruth 1:1, as we look at the introduction to this fantastic book of the Hebrew Bible. In Jewish circles, people tend to call it Megillat Rut (מְגִלַּת רוּת), the “scroll of Ruth,” rather than the “book” of Ruth. This is because Ruth is written on a separate scroll that is publicly read during the holiday of Shavuot (חַג שָׁבוּעוֹת), just as Lamentations (אֵיכָה) is read during the night of Tisha Be’Av (ט׳ בְּאָב) to commemorate the two-time destruction of the Temple in Jerusalem.

For those who are interested in a linguistic treatment of the text, you will certainly be challenged by Robert D. Holmstedt’s Ruth: A Handbook on the Hebrew Text (Waco, TX: Baylor UP, 2010). I recently purchased a copy, and it has renewed my passion for this book of the Bible.

Let’s look at what’s contained in this first verse and break it down. I’d like to start this as a series.

END_OF_DOCUMENT_TOKEN_TO_BE_REPLACED

When it comes to categorizing and labeling Hebrew verbs, we can do so in several ways. First, we can look at what general patterns (“stems” or בִּנְיָנִים) the verb appears. This is similar to Latin’s verb conjugations, by which nouns are categorized by the forms they take in the infinitive (whether -āre, -ēre, -ere, or -īre). In Hebrew, roots may appear generally in seven stems, though there are a few outliers here and there in peculiar stems as well, and we can label verbs as “qal” or “piel” or “hiphil” (or whatever stem they appear in by their nature).

Another common way to group Hebrew verbs is by the gutturals or vowel letters that they contain and the position in which they are found in the root.

The guttural letters are ʾalef (א), heh (ה), ḥet (ח), and ʿayin (ע). Resh (ר) is sometimes included in the list because it behaves similarly to them. The vowel letters (know in Latin as matres lectionis) are heh (ה), vav (ו), and yod (י). Notice that heh is both a guttural and a mater lectionis (sg. of matres lectionis). Since nun (נ) tends to assimilate into other letters, many roots with nun are also considered weak, depending on its position in the word. When these letters appear in a root, they mess up the normal pattern, and those mess-ups are predictable and regular.

END_OF_DOCUMENT_TOKEN_TO_BE_REPLACED 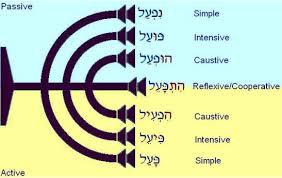 END_OF_DOCUMENT_TOKEN_TO_BE_REPLACED

In recent years, there has been lively discussions concerning word order in Biblical Hebrew.  For last century, and until  very recently, the consensus among most scholars has been that Hebrew exhibits VERB-SUBJECT word order.  For example: